How can debt traps be made visually clear while not also rendering those who succumb to those traps as unthinking dupes? And how can the visualization of debt traps and of the indignities of debt collection differentially be used to understand and to change those processes? The Dignity and Debt Network visualization initiative will develop a new set of public goods, visualizations of dignity, respect, and autonomy alongside data on debt, debt traps, and meaningful financial inclusion across the globe.

How can scholars and practitioners better depict what debt looks like from the point of view of the indebted? The visualization initiative will also gather the images people construct on paper, in art, in song, in interviews, in testimony, in complaint, and through in vivo as well as virtual observations in which people depict their own debt in relation to their own social status and networks. This aspect of the Network’s work allows researchers and practitioners to ask how people experience, interpret, and embody different forms of debt. Why do some debts hurt more than others, even when they are mathematically equivalent? And what might be dignity enhancing versus degrading in the experience of debt that is seen, understood, and deeply felt?

For example, Dr. Sibel Kusimba at American University is one of our Network members who examines how women in Kenya visualize their money and their financial obligations, including debt, in relation to social networks. Her work was recently published in Economic Anthropology and one of the images from her fieldwork is on the cover of the journal’s issue. We are in conversations with Kusimba to explore how these women imagine monetary transactions and what kinds of values present themselves in these financial decisions and transactions (see Kusimba 2018): 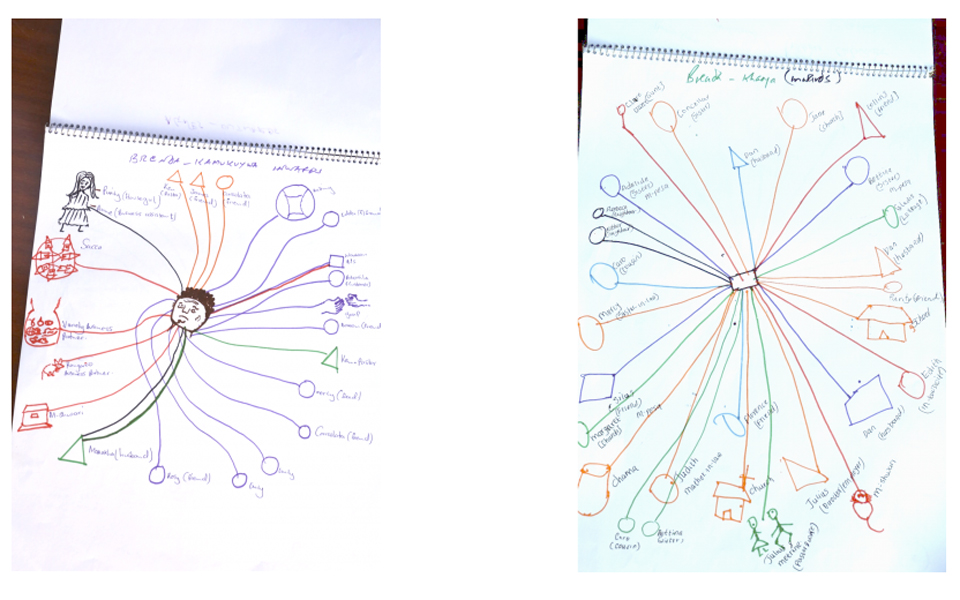 Collaborating with the VizE Lab for Ethnographic Data Visualization in the Department of Anthropology, we will also produce data visualizations to help reveal patterns in big data collections of consumer complaints, or maps of how value circulates in a number of forms.

As part of its visualization initiative, the Dignity and Debt Network will host meetings of two working groups on measuring and visualizing dignity, respect, and social belonging in the use of financial services. The visualization project should help researchers redesign national level financial inclusion surveys and should offer alternative scales of inclusion that highlight the importance of interpersonal relationships and shared understandings of what a good life means, as well as how financial services facilitate or impede it. (October 2018 to May 2022.)